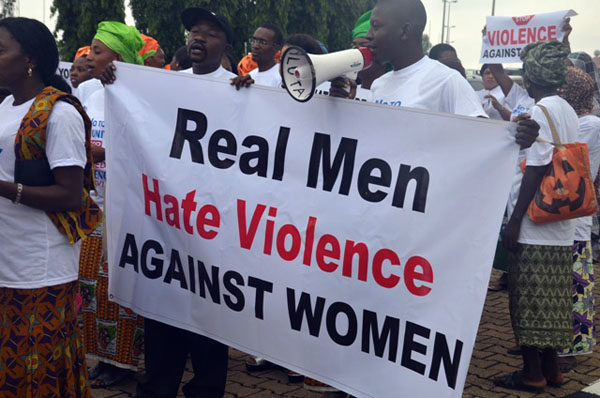 Some women (and men) are currently protesting against the Chairman, Senate Committee on Federal Capital Territory, Dino Melaye (APC-Kogi West).

This is coming after the senator alleged
on Monday, that wife of former Lagos state governor and Senate
Committee Chairman on Women Affairs, Oluremi Tinubu (APC-Lagos Central) “splashed” N75 million to sponsor protests against him in the FCT.
Crisis began after Tinubu reportedly
called Dino a “dog” and a “thug” during a closed-door session. Dino,
according to reports, reacted, saying that he will “beat up” and
“impregnate” Tinubu and nothing will happen.
The protesters are seen with placards
and banners which read: “Say no to impunity, stop gender based
violence”, “Danger! Dino on the prowl, women beware”, “women are not
threat objects,” among others.
The protesters were on all white tops with the words: “No to impunity for gender based violence,” printed on them.
This is coming after Pro-Melaye women held a press conference in Kogi asking Tinubu to apologise to Melaye.
Also, Tinubu, yesterday wrote to the Senate and the APC to sanction Melaye over threat to her life.