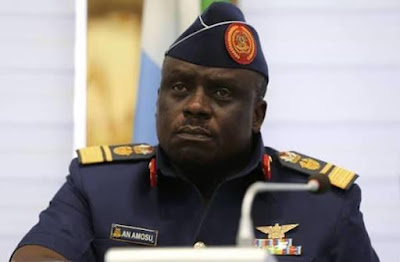 Posted By: seunon: April 20, 2016In: HomeTags: No Comments
Print Email

According to Sahara Reporters, a source at EFCC who spoke on condition of anonymity said

“I can confirm to you that Amosu has returned N2.3b. He raised two bank drafts. One draft was N2b while the second was N300m”.

In Amosu’s Badagry home, the EFCC had also recovered about $140,000 in cash.
The PUNCH had also reported that the anti-graft agency recovered N381m from Amosu’s wife, Omolara. The money was recovered in three tranches of N180m, N101m and N100m.
The detective told PUNCH that the money was traced from the account of the Nigeria Air Force to the bank accounts of a company in which Amosu’s wife is a director.
Calculations by PUNCH on Tuesday showed that so far, the EFCC had recovered at least N4bn from Amosu in cash and assets.
Amosu and over 10 senior officers are being probed by the EFCC as part of the $2.1bn arms scam, especially in relation to the 10 contracts of the NAF, said to be worth $930,500,690.00.
Amosu and his predecessor, Air Chief Marshal Alex Badeh (retd.) were in January arrested for the non-specification of procurement costs, absence of contract agreements, award of contracts beyond authorised thresholds, transfer of public funds for unidentified purposes and general non-adherence to provisions of the Public Procurement Act.
The investigation also centred on the payment of  N4,402,687,569.41 for unexecuted contracts; the procurement of two used Mi-24V helicopters instead of the recommended Mi-35M series at $136,944,000.00; four used Alpha-Jets for the NAF at US$7,180,000  funded by ONSA; the cannibalisation of engines from NAF fleet to justify procurement of jets; and the excessive pricing of 36D6 Low Level Air Defence Radar at $33m instead of $6m per one.
Besides, N2.5bn contracts were allegedly awarded to Syrius Technologies ( an Ukrainian company) not registered in Nigeria and seven contracts worth N599,118,000.00 to the Defence Industry Corporation of Nigeria; two were delivered
While Amosu was granted bail, Badeh was charged to court where he is currently facing trial.
A detective at the EFCC said, “Amosu has been cooperating with us and has been returning funds. However, Badeh was very stubborn. Since he refused to return funds, we took him to court.”
The source revealed that the EFCC had traced 17 accounts to Badeh and had frozen all of them.
“Badeh’s case is in court so I cannot talk much about it. However, even after he was charged, we continued to investigate his case. We have frozen all of his accounts including the dollar accounts he opened here in Nigeria.”
A former Director of Finance and Accounts at the NAF, Air Commodore Salisu Yushau (retd.), who is an EFCC witness, had revealed before a Federal High Court sitting in Abuja, that all past air chiefs diverted N558.2m monthly from funds meant for the payment of salaries of Nigerian Air Force officials.
The EFCC source said that the commission had reason to believe that the diversion of funds at the NAF was still ongoing.
He said, “We were told that over N558.2m was diverted by the office of the Chief of Air Staff monthly and the money was converted to dollars. We were told that air force officers from the rank of air commodore and above all benefitted from the money.

“We believe that even after Amosu had left, they still shared money. We were told that even in February, these illegal deductions were still made. In due course, our findings will be made public.”