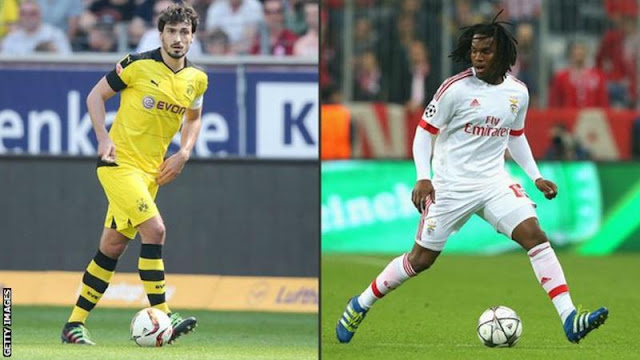 German champions Bayern
Munich have signed Borussia Dortmund defender Mats Hummels and Benfica
midfielder Renato Sanches from the start of next season.
Hummels, 27, will join Bayern on a five-year deal subject to a medical.
Bayern
have paid Benfica €35m (£27.5m) for 18-year-old midfielder Sanches, who
was also wanted by Manchester United, in a deal which could rise to
€45m.
Carlo Ancelotti takes charge at the Allianz Arena this summer, when manager Pep Guardiola joins Manchester City.
Hummels
started his career at Bayern, playing one Bundesliga match in 2007,
before moving to Dortmund. His final appearance for Dortmund will be
against Bayern in the German Cup final on Saturday, 21 May – if
selected.
The clubs have agreed a “silence” over the fee.
Chief
executive Karl-Heinz Rummenigge said: “Mats is one of the best central
defender in the world. With him, we can increase the quality of our team
again.”
Portugal
international Sanches, who had a medical on Monday, has also signed a
five-year deal with Bayern, who won the German title for a record fourth year in a row this season.
Rummenigge added: “Renato is a dynamic, combative and technically gifted midfielder who will strengthen our team further.”