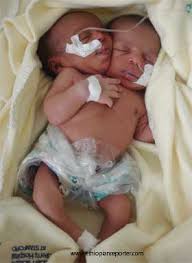 Doctors are trying to determine which limb is controlled by what
brain before attempting to separate a pair of conjoined twins who share
every vital organ but their brains. The boys, who are not named, were
delivered in Mumbai at Sion Hospital in India last Wednesday.

“In medical literature, we have only seen two such
cases where one baby has survived when twins had a fused common heart,”
Dr. Paras Kothari, head of pediatric surgery, told CEN.

The boys were delivered via caesarian section, and
their mother is said to be stable but extremely distraught. Before an
operation is planned doctors must determine which brain affects which
limb, the report said.

“When they are asleep, we will pinch each limb to
check which baby reacts. Based on our understanding of whether one baby
has all sets of limbs intact, we will proceed to separate him from the
second,” Kothari told CEN.

Conjoined twins occur once in every 200,000 live births.