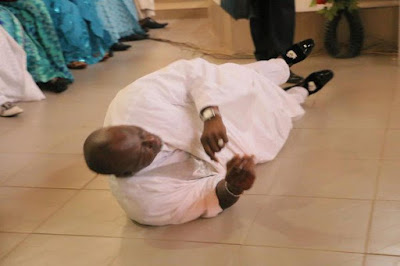 Dino Melaye Confessed in church, says I was tempted to seek diabolical solution

The Chairman, Senate Committee on the Federal Capital Territory (FCT), Otunba Dino Melaye, on Sunday
stunned holy congregation at the Apostolic Church Nigeria, Oke-Ayo
(Iluafon) Assembly in his home town, Ayetero-Gbede, Kogi State, when he
narrated how was tempted to seek diabolical means during preparations for the 2015 general election.
According
to him, the several temptations were to ascertain his fate at the
election on the platform of the All Progressives Congress (APC) in which
he floored his arch rival, Smart Adeyemi of the Peoples Democratic
Party (PDP).

Melaye
who is representing Kogi West, made the revelations during a
special thanksgiving service and empowerment programme for youths in the
area, attended by 26 Senators and all traditional rulers in the area.
During
the empowerment programme, 18 seater Toyota Hiace Bus valued at N9
million each was donated by him to the Christian Association of Nigerian
(CAN) in Kogi West, Council of Ulamas, Kogi West and the National
Automotive Technicians and Artisans Association (NATA) and Ijumu
Development Union (IDU).
Other
items donated include a 32 seater coastal Bus to a Non-Governmental
Organisation (NGO) within Kogi West valued at N32 million; electric
grinding machines to widows in all the 85 wards of Kogi West; sewing
machines to indigent apprentice who have completed their trainings and
driers and salon kits.
Melaye
also doled out computers to secondary schools within the senatorial
district; 250 telephones to dedicated his loyalists valued at N100,000
each.
The
Senator who had earlier done 100 boreholes in Kogi West Senatorial
District, gave out scholarship to indigent persons in all the wards.
He
however added a new dimension to the purity and supplication when he
rolled on the floor of the church, wept before God and thanking God for
His mercies to the admiration of the congregation.
According
to him, some of his core loyalists who were so deeply concerned about
his fate ahead of the election, tempted him to seek victory prediction
through different diabolical means, including soothsayers, for which he
flatly rejected.

Melaye said, “When I was contesting election,
even from among my supporters, some people came with various advice. In
fact, somebody came that I should go to the seven Local Government Areas
and fetch the soil of the seven LGs. He said that was the way to my
victory and I laughed at his ignorance. But I rejected because I’ve
vowed that I will never be diabolical in my life, it pleases to served
God.”

Speaking about his election court cases in the Election
petition tribunal, the senator, regretted what he called “unnecessary
court cases”, he went through from his political rival, but thanked God
for granting him victory in all.