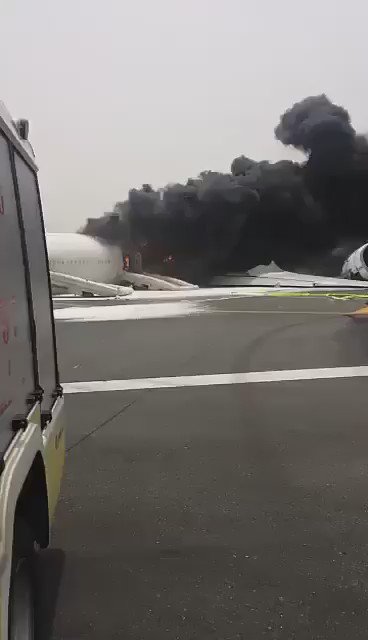 An Emirates Boeing 777 with 300 people on board crash landed at Dubai
International Airport Wednesday, skidding along a runway and erupting into an
intense fire — but the airline said all onboard survived.

An engine was torn from the right wing of the plane as it scraped to a halt,
forcing passengers and crew to evacuate before the aircraft was gutted by fire.

Flights were halted at the airport — the busiest in the Middle East — as
black smoke billowed from the wreckage.

Eyewitness Osama Alghamdi, a 23-year-old student, told NBC News that he saw a
“huge, huge fire” and then “two explosions” while heading to his gate for a
flight to Glasgow, Scotland.

Despite the scale of the fire and the speed at which it engulfed the jet, the
evacuation of 282 passengers and 18 crew through inflatable slides appeared to
have been successful.

“We can confirm that there are no fatalities among our passengers and crew,”
Emirates said