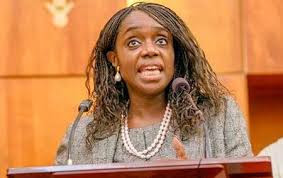 Nigerians yesterday got a
piece of bad news from the Minister of Finance, Mrs Kemi Adeosun that
the economy is in recession. But there is no need to panic because it
will be short, according to her.
Mrs
Adeosun, broke the depressing news to Senators in plenary while briefing
them on measures adopted to get the economy out of the woods. She said
the Federal Government had released N247.9 billion in the last two
months for capital expenditure.
She
said N60 billion would be released for capital vote in the next few
weeks, adding that N74 billion went to the Works Ministry.
All the releases, Mrs. Adeosun said, had been fully cash-backed.
The
Minister, however, told the Senators that the recession would be a very
short one because the government had measures to reverse the trend.
She
said Nigerians should not dwell on the recession but rather on where the
country is going through the measures being taken to save the economy.
Mrs.
Adeosun said: ”Is Nigeria in recession? Technically. If you go into two
quarters of negative growth, technically, we are in recession. But I
don’t think we should dwell on definitions. I think we should really
dwell on where we are going. I think if we are in recession, what I will
like to say is we are going to come out of it and it would be a very
short one because the policies that we have would ensure that we don’t
go below where we need to go and I think with what we are doing, we
would begin to turn the corner I believe by Quarter Three.”
“We are
not the only country in recession; many countries are doing far worse
than us. But for Nigeria, what Nigerians want to know is ‘how’s that
going to affect me’ and I want to assure everybody that what we are
doing is going to work and it’s going to turn this economy around,” the
minister said.
-The Nation.