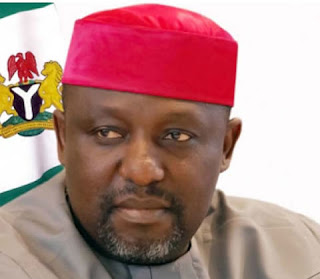 Gov. Okorocha plans to reduce work days to 3days in a week

Gov. Okorocha plans to reduce work days per week to 3, so as to cut cost on salaries

The Imo State governor said this, today, while briefing journalists on the state of affairs in Imo. He said the reduction of work days would enable workers to attend to other activities that would generate money to supplement their monthly salaries to take care of their families. .

His words: “I encourage Imo workers to find additional things to do to support their families because of the economic situation we are facing in Nigeria. We are considering to reduce the working days from five to three in Imo, so that workers will use the rest of the days to work and support their families.”

He added that Imo government was equally planning to review workers’ salaries downward. He said that in spite of the current payment of 70% of salaries to workers, the state still paid the highest salary scale among South-Eastern states of Abia, Anabmbra, Ebonyi and Enugu.

His words: “Directors in these other SE states receive something a little above N90, 000 while in Imo they receive more than N100, 000. We intend to clear salary arrears up to July by next week. After that, we will consider downward review of salary to workers to be at par with other SE states.”…. n anyone who doesn’t like it, can resign….