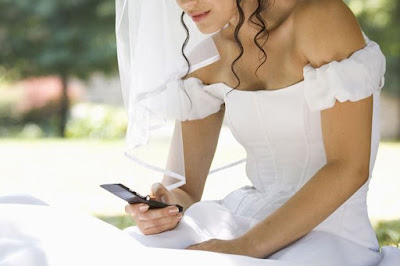 Groom divorce his bride on wedding night for been Busy Chatting

A relative said after the wedding ceremony the Saudi bride and groom went to their hotel room in Manama in Bahrain and when he tried to consummate their marriage, his wife decided to use that time to reply friends who had sent their congratulations.

The groom wanted to talk to her but she ignored him. When he asked her about the reasons, the bride said she was busy communicating with her friends who were congratulating her on their marriage on the mobile During the heated argument between them, the groom told her he was divorcing her and left the hotel.

The relative said that the groom filed for a divorce, the case was filed and the court referred it to the reconciliation committee to see if the newly-weds could be reconciled. But the groom refused to withdraw the case insisting he was no longer in being married to the bride and that the divorce case should proceed.

****Alot of people really need to learn how to do away with their Phone.