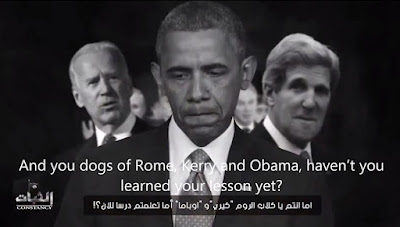 ISIS issued an Open threat to Obama and Us

Terrorist group ISIS has released a new video warning Americans to expect a Paris-style terrorist attack soon. In the video, the ISIS terrorist with British accent issued a chilling threat to the US and President Barack Obama.

“Paris isn’t far from you – we will by Allah’s permission do to your country what we did to Paris. We will kill, slaughter and burn your people. “Inshallah [God willing], we will attack you very soon with anything we lay our hands on.”

“To Obama, the dog of Rome, today we are slaughtering the soldiers of Pasha, tomorrow, we will be slaughtering your soldiers. We will soon, like your puppet David Cameron said, begin to slaughter your people, on your streets.”

He then drops his hostage onto his front, pulls his hair back and cuts off his head as bloods spatters all around, before looking up at the camera menacingly. “No matter how many times you delete our accounts or chase our places and no matter how you fight us, we are still here and we will support the Islamic caliphate state.”