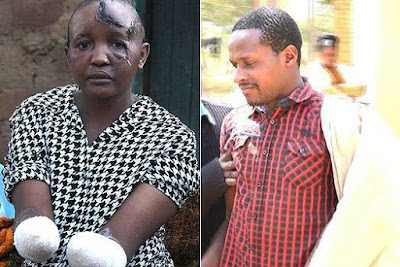 Posted By: seunon: August 02, 2016In: HomeTags: No Comments
Print Email

On July 24, 2016, Stephen Ngila, 34, chopped off the hands of
Jackline Mwende, 27, over her inability to conceive after seven years of
marriage. “I could not understand why he was blaming me yet we had gone
to hospital last year and the doctors had said he was the one with
issues, which could be corrected.

He moved out of our house three months ago and came back on Sunday
(July 24) at around 8.30pm. When I opened the door, he said ‘today is
your last day’ and started slashing me with the panga,” said Mwende.

She said Ngila refused to follow up on his treatment. Relatives, who
want the husband to face the full wrath of the law, say Mwende had
always wanted to leave her abusive husband but was being persuaded, by
her pastor, to stay back.

The man was arrested on Monday July 25 at around 1pm in Machakos town hours after he fled his home in Masii. he was arraigned at Wamunyu law courts where he denied the charge. He will be remanded until August 5.