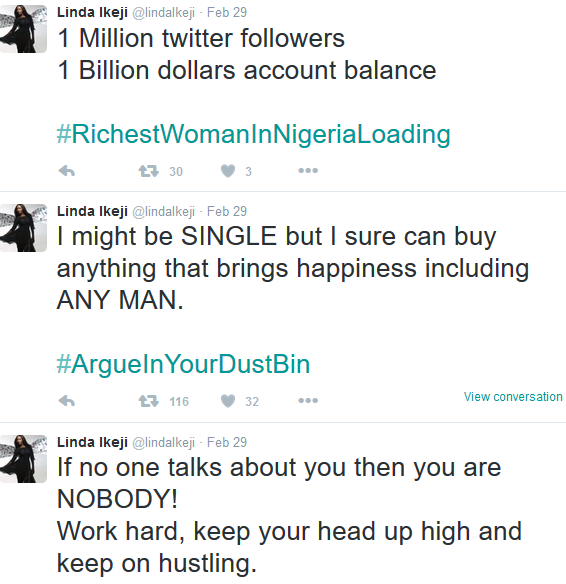 Posted By: seunon: March 04, 2016In: HomeTags: No Comments
Print Email

Linda ikeji took to her blog to dissociate her self from, that it was a fake twitter handle .

So a couple of days ago, I reached one million followers on Twitter…you go, Linda! Lol. There are like 2million Nigerians on Twitter (I stand to be corrected) and half of them follow me…I’m so honoured. Thanks Nigeria! 🙂

Meanwhile, there’s something else I want to address because I saw a lot of folks abusing me upandan on social media this week over tweets they think I posted. Something about ‘I can buy any man I want’. Yeah, right, that’s why I’ve been single for years! #Rollseyes!

I may have made careless statements during the Hermes bag saga that I definitely regret and have apologized for (I was stark raving mad when I was posting on IG…I was in another world…lol) and my words were to the ‘haters’ but I forgot that there were young people who look up to me who were also observing what was going on and were disappointed by my remarks. I regret my words. So, yeah, I may have said those silly things but I would never post those tweets from the fake account. It was tweeted some days ago and I addressed it on Twitter but I see some people/groups on Facebook talking about it and many still believe I tweeted it and are just abusing me anyhow..lol. Thus, I decided to address it here!

No one can buy a man…or a woman for that matter. You can only buy a Muppet or a gold digger, not a real man. And a real man is what I am looking for! *wink*. See the tweets after the cut and please if anyone can help me shut down the Twitter account, I would appreciate it before they spoil my career..lol

The fake handle has 4k followers. It is @lindaLkeji. So the L is a small letter, and makes it look like lindalkeji. Mine is @lindaikeji with an i. (There are several other fake Linda Ikeji twitter/Facebook pages). Also, can anyone help me get verified? Thanks in advance…

And the hopeless tweets from the handle