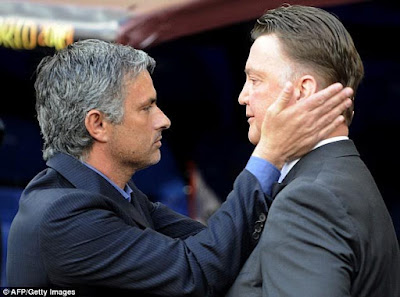 The club officially announced the news this afternoon after private
meetings between club Chief Executive Ed Woodward and Louis Van Gaal and
both parties agreed that he had to go after missing out on the season’s
target of Champions League qualification, despite winning the FA Cup on Saturday.

Albert
Stuivenberg,  Franz Hoek,  Max Reckers and other Dutch members of his
backroom team have also been dismissed with Jose Mourinho and his own
backroom team set to assume duties this week.

Mourinho expects to have more talks on Tuesday
ahead of signing a three-year deal with his long-term assistant Rui
Faria and goalkeeping coach Silvino Louro expected to follow.
Ryan Giggs’ future at United is up in the air despite Mourinho’s wish to keep the Welshman at the club.
Executive vice chairman Ed Woodward said on the club’s official website manutd.com
: “I would like to thank Louis and his staff for their excellent work
in the past two years culminating in winning a record-equalling 12th FA
Cup for the club (and securing him a title in four different countries).
He has behaved with great professionalism and dignity throughout his
time here. He leaves us with a legacy of having given several young
players the confidence to show their ability on the highest stage.
Everyone at the club wishes him all the best in the future.”