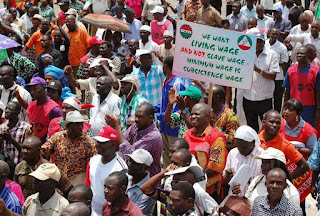 The Nigeria Labour Congress (NLC) and the Trade Union Congress of Nigeria (TUC) have jointly proposed N56,000 as the new minimum wage to the Federal Government. The minimum wage presently is N18,000. that the Government has not been able to pay.

“I can say now authoritatively that as of yesterday (Tuesday) we made a formal proposal to the Federal Government of N56,000 to be the new minimum wage. The demand has been submitted officially to government and we hope that the tripartite system to look at the review will actually be set up to look at it. Our argument is that, yes, it is true that the economy is not doing well, but the law stated that wages for workers must be review after every five years. So, the issue must be looked into by the Federal Government and workers should not be seen as sleeping on their rights,”he said.