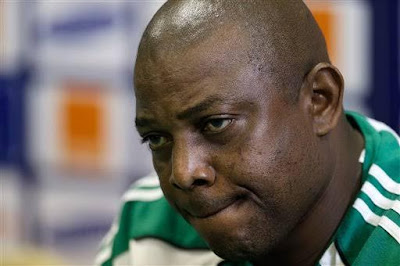 The burial of former Super Eagles captain and Chief Coach, Stephen
Keshi, who died on June 8th has been slated for July 29th at his
hometown, Illah in Oshimili North Local Government Area of Delta State.
According to the Delta State Commissioner for Information, Patrick Ukah
who is a member of the Keshi burial committee,‎ Keshi’s funeral ceremony
will commence on
Thursday July 28th and end on Sunday July 31st.

The funeral would kick off in Edo State on Thursday
July 28th with a requiem mass at Saint Paul’s Catholic Church, Airport
Road, Benin-City, from 9:00 am, followed by lying in state at Samuel
Ogbemudia Stadium, also in Benin-City, by 11:00am.

There will also be a novelty match by All Stars as well as a session of
tributes in honour of the late soccer star at the stadium.

The service of songs/vigil Mass will the same day hold at St John the
Evangelist Catholic Church, Illah, by 6:00pm, according to the obsequies
release.

On Friday, July 29th, his body will leave Asaba for his hometown, Illah
by ‎7am.

A thanksgiving will be held at the Evangelist Catholic Church, Illah on Sunday July 31st.