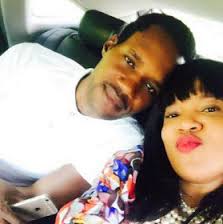 Toyin Aimakhu drags her ex, Seun Egbegbe to the police, as he signs undertaking never to disturb her again

Read the press statement below…

Nollywood filmmaker, Seun Egbegbe was arrested two weeks ago, detained
and later released on bail in respect of his threat message against
Toyin Aimakhu.

He was told to report when Toyin Aimakhu arrives Nigeria and was
summoned by the police in Lagos today.


Toyin who was also at the station in company of her lawyer, Bosun
Osifowora stated that Seun Egbegbe’s threat has affected her business
and colleagues and producers are afraid to call her for movie shoots
because of the threat since they were aware of his violent nature.

While at the Commissioner of Police’ office, Seun recounted his
position, prostrated and signed an undertaking never to hurt or disturb
Toyin whether privately or in company of people.

He also undertook to make a new video to that effect with Goldmyne TV
where the initial threat video which went viral was broadcast.

He is also to report fortnightly at the CP’s office in Ikeja and he has
been placed under watch.